Posted by joshlai on June 18, 2015
Posted in: Detailing. Leave a comment

We have a very special JDM car with us today, seldom seen on the road, low profile yet with a beast under the hood. This is a JDM Sleeper.

For the past god know how many years ago, since the first yamaha tuned engine, the car had never been polished. Yet, Japanese quality prevails.

We inspected the body parts with just the normal naked eyes and we saw a hazy stained surface. 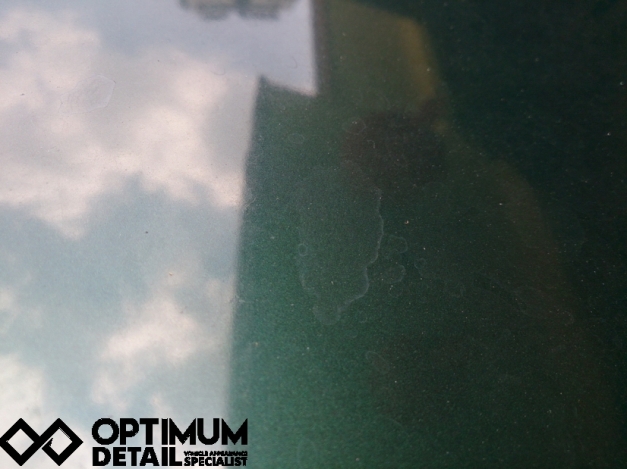 Under the assistance of lightings, we can see that there are swirls hidden under the oxidation

Some areas gaved up, The clear coat had failed many years back.

We also found some deep scratches on the paint.

Some areas had light swirls

Some areas had severe swirls.

ON the side panels, the swirls become more obvious as it is less oxidized. 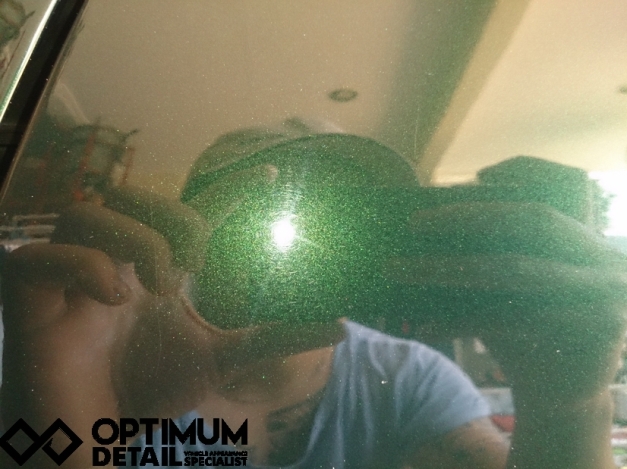 We gave the car a deep cleaning. So deep that it turned out glossy after the wash. Its a miracle!

We removed some deep scratches, 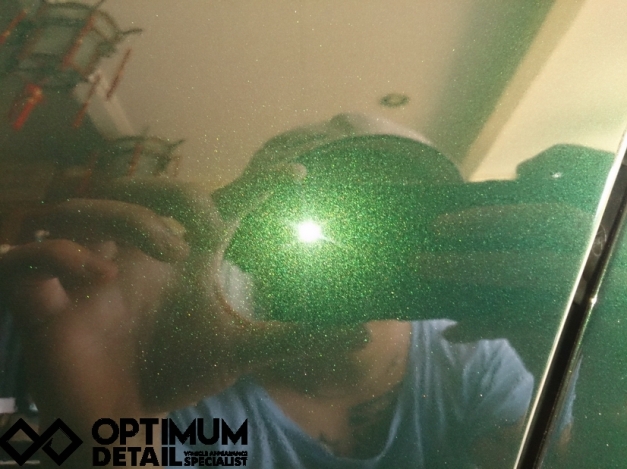 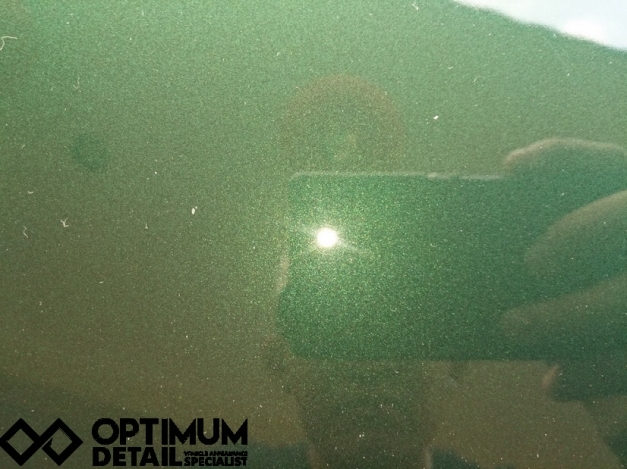 Got the comparison of before and after

I could also clearly see my reflection.

Swirls were at its minimum now.

and finally restored all oxidized surfaced back to its original state. Here is a gloss comparison of the side mirror. This is the before. 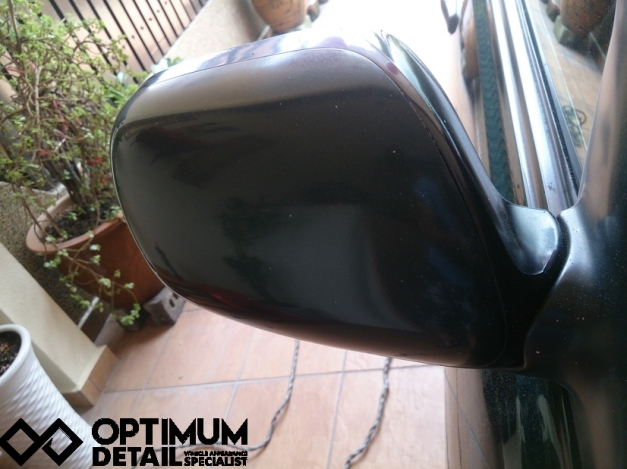 This is the After.

As a result of a 9hour paint correction, we were able to restore the paintwork to a 90% damage free state. 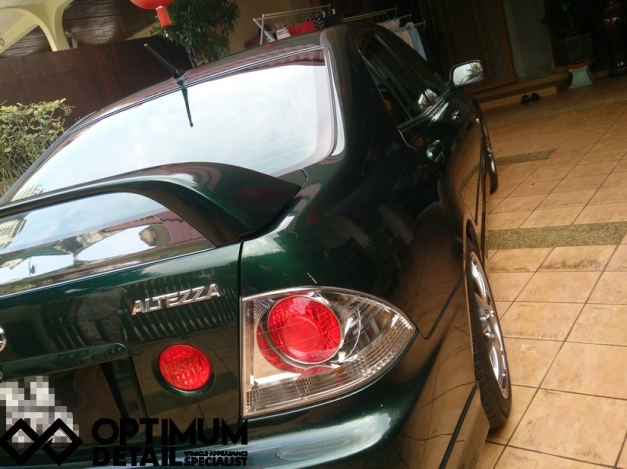 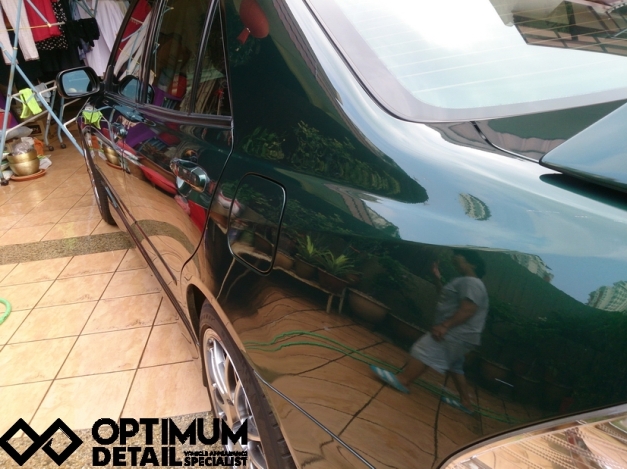 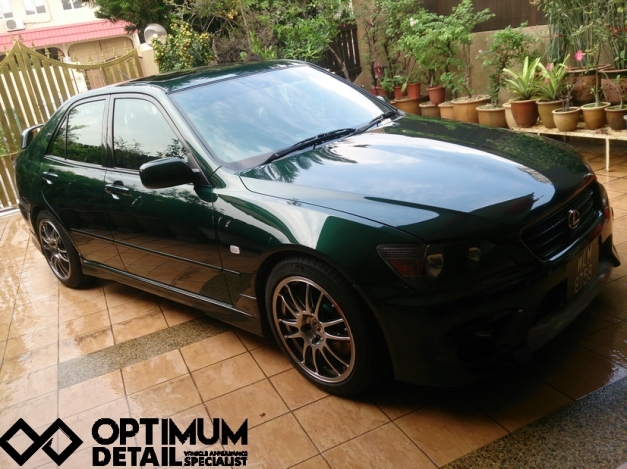 Posted by joshlai on June 10, 2015
Posted in: Detailing. Leave a comment 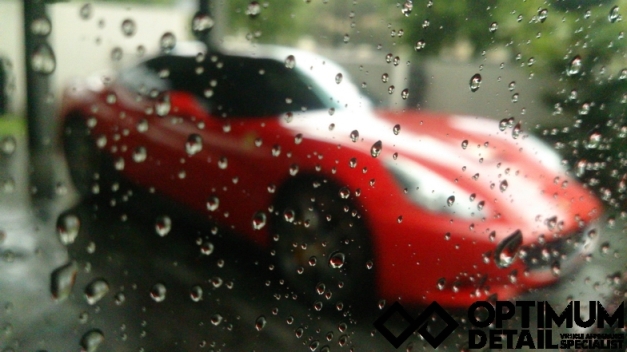 We have with us a not so common Ferrari today. Just like you daily driven Perodua(s), Honda(s), or even Toyota(s); Ferrari(s) also require love and pampering. We are here for only 1 purpose, to restore the paint work on this Italian beauty.

Upon arrival, we got to inspecting the car’s condition straight away. Overall there was nothing major to spot.

Yes, that is a Lamborghini. Being said, looks can be deceiving, even on cars like this. You may see gloss and shine now but that is before we show you the finishing.

Many may feel that Ferrari(s) are parade cars or garage cars, but this owner really uses the car, Pedal to the Metal.

From just 1 weekend, bug splatters all over the front. Fortunately, the front is covered with a PPF film. 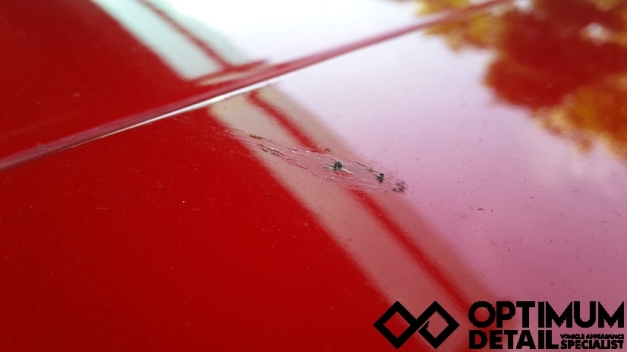 More splatter found on the front of the car.

Areas like this are guaranteed to be neglected, check it out.

Many of us just pump fuel but never bothered to take a look at that area, Even on a Ferrari, dirt collects here.

To the paint, once a LED light is shined on the paint, we found swirls.

Some were very severe, some were light. 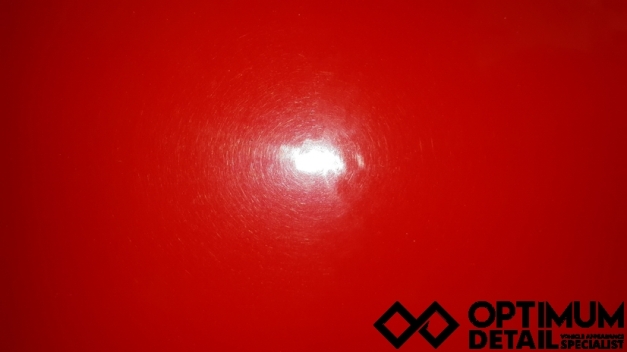 Some were swirls with a combination of dirt, tar and watermark.

Plastic taillights are the most commonly scratched up part of the car due to its soft surface. 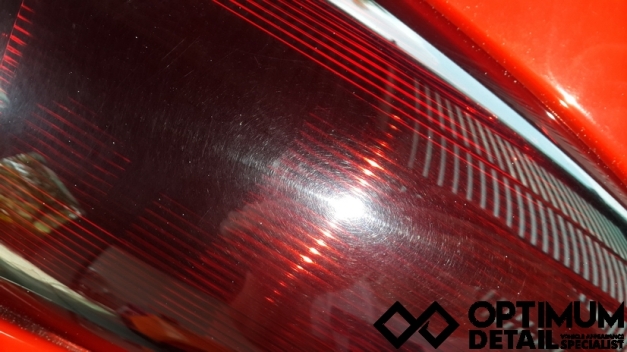 The owner actually got the roof of the car wrapped in 3M metallic grey vinyl, it was very swirled up.

Not only its swirled up, the looks of the vinyl was very much oxidized and hazy.

We were briefed by the owner that there are some repainted panels. We checked and found that the carbon vinyl was damaged during the polish after repainting. 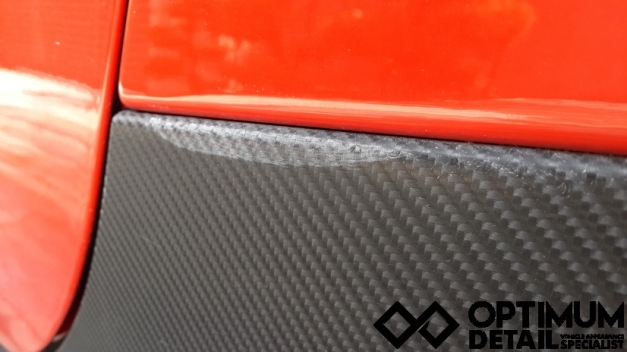 Other than that we also founds some unknown black spots on the paint. The owner noticed them too but did not know where is its origin.

We started with a good and deep washing. Claying every surface and removing any stains along the way. 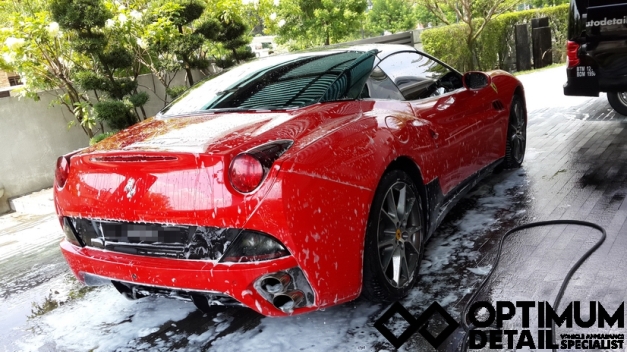 Once complete, we did some test spots on the vinyl, checkout the results. Remember before?

After 1 pass of correction, some swirls were still visible. 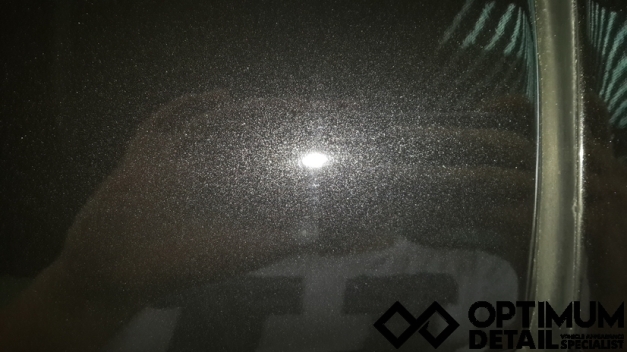 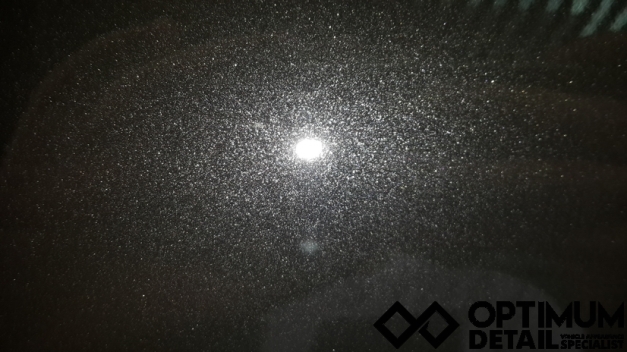 Due to its soft plastic nature, we tried our best to fully correct it. Here is after 1 stage of correction.

Here is the final results. 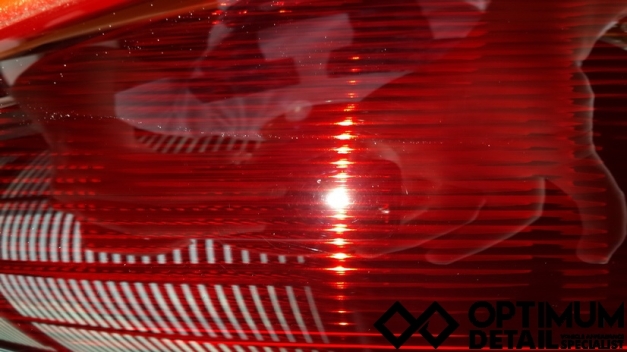 Remember the paint before ?

After multiple rounds of paint correction, we were able to  remove most of the damages.

On another panel, Before.. 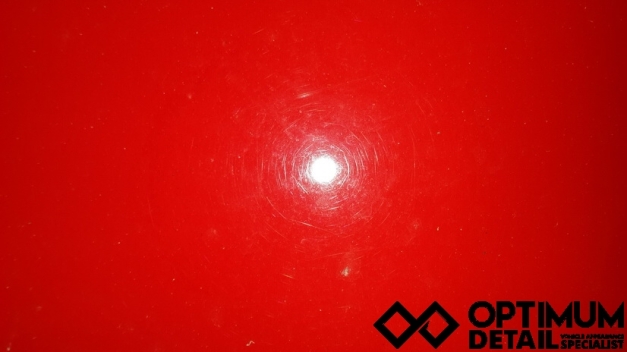 After. Results may not be as impressive due to some very deep scratches but…just wait.

After completing all the polishing, we polished all the emblems.

Ferrari brakes are made of carbon ceramic material, hence no brake dust.

But because its on the road, there are bound to be road grime and dirt. 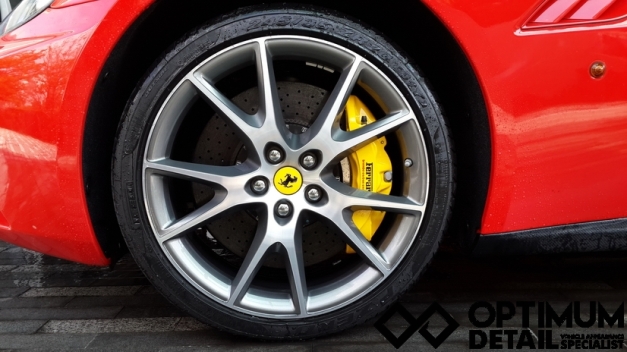 Finally, after a gruesome 6hours, the car is ready for show. 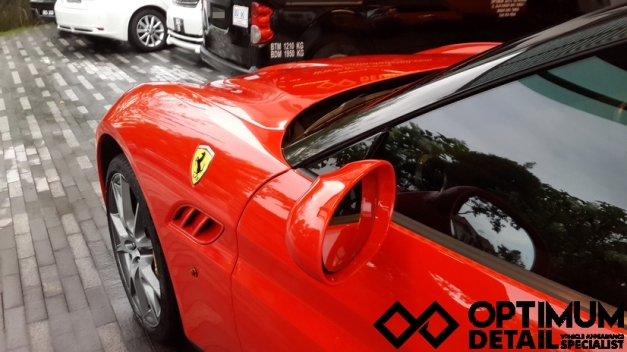 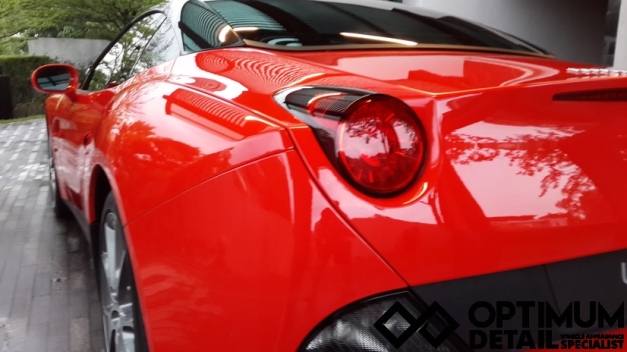 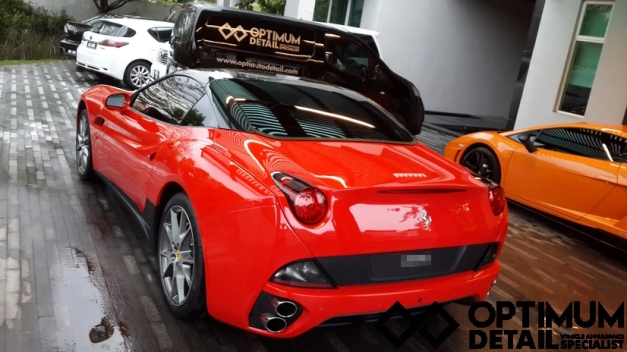 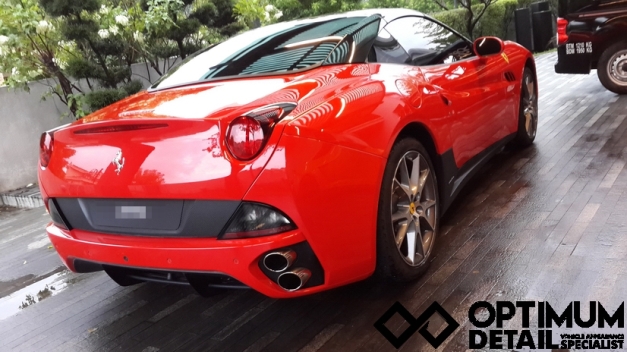 Coming Up next. The Distance Italian Relative.